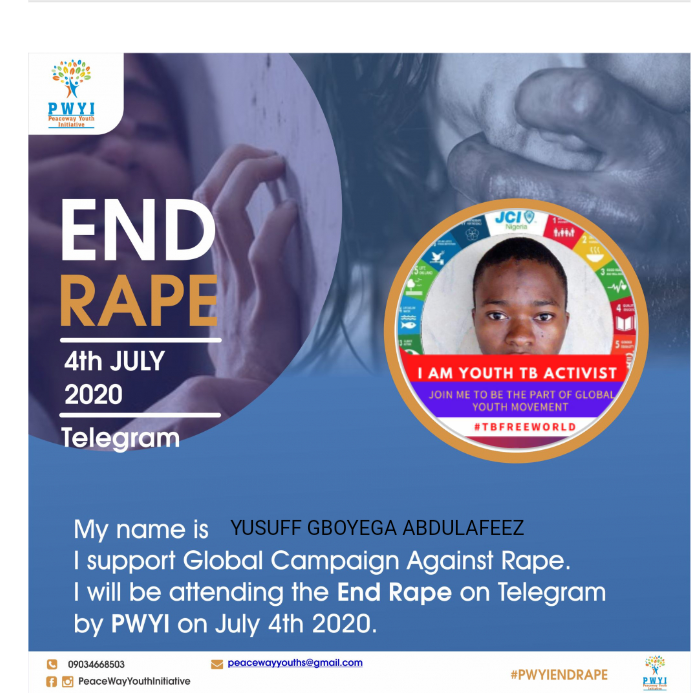 
I have decided to be mute and watch the recent uproar by people that are either victims or unknown culprits gallivanting on the various media platforms to make their assertion public on the need to curb brutality that is known as rape. Either male or female reproductive system must be understood by all carrier before the ripening of the sense of Reproduction i.e hormones that support reproductive characteristics in male and female.
I wonder ecstatically who will challenge the status quo and aid promulgating the Reproductive lessons to the vulnerable group of teenagers in the world. A fetish cleric, a dubious master,a lustful teacher, a cunning father, a dullard mother as the case may be can never set a brilliant pace to ameliorate the unfortunate Challenges on sexual Education lacking in our society. Life of our teenagers are becoming worse daily because of Cursed father and mother that put the love of Material wealth ahead of their children moral support.
My doctrine and faith teaches numerous things on the perspective of sexuality among the teenagers, adolescent and adults including what should be known and Understood as a clog in the wheel of Progress which is Rape.The other Doctrines and belief also put high Importance on the manner at which Children moral Support can prevent indiscriminate sexual pleasure, illicit act as well as conspiracy theories among the toddlers, Adolescents and adults  of diverse gender. What are the reason our lesson have minimal impact on our larger Society?
The Society is structured to allow the Rich have their way perfectly even when they have done the wrong thing that require them to be be brutally punished. A loud legal practitioner will stand fugitively to defend a Murderer, A Rapist and A Thief at a Court of law. The baised law of the land will allow a judge to sentense a good Political leader to pay  meagre amount of fine after stealing what belongs to a whole generation but will sentence a slippers stealer to forty years imprisonment.
The law of this land is highly Corrupted which make me divert from the clamour that we need justice, We don't necessarily need justice but we demand a total overhaul of the moribund judicial system in Nigeria. The law court should stop calling a known criminal suspect,  stop referencing a Corrupt judge, Stop defending a rogue in sheep clothing in the name of Rapist and adjust their own perspective to the criminal laws of the land to increase our faith and belief in the Judicial System.
Rape victims requires investigation because a one sided judgement is bad according to an adage from South western Nigeria. The victims must be punished if found guilty as well regardless of the outcome of the Rape incident. The victims can also be sentenced if found culpable of some illicit act such as the one in everyone's mind because there will never be a smoke without fire. The victim can also be compensated if found not guilty of any offence by the higher authorities in Different form because the legacy of goodwill to the victims will also encourage others to come out clean to address their worst experiences.
What did you think the Culprits of Rape deserve? They already demand the following drastic step Which are very effective in taking care of the world from men and women without control on their Reproductive characteristics. The Culprit must be Castrated/ womb removal, The Culprits Reproductive Organs must be withdrawn Scientifically to stop Bothering the Environment, The Culprits Two legs must be amputated to curb indiscriminate Movement then he can be sentence to life imprisonment for the offence because I know fully well that when you want to stop an act some tough decision must be followed to serve as deterrent for others.
In Addition, Parents of the Culprits should be sentence to various years of imprisonment according to their level of lackadaisical attitude towards their child moral upbringing, The Culprits siblings should be put on compulsory house arrest with full enforcement by Government agencies. The Government can also declare the family not worthy of marriage in a National dailies and their information will be in the Rapist Register for the rest of their life.
I believe strongly that all this menace will stop manically after the Government and National Agencies Implement all the above amenities for the Victims and Culprits of Rape.
#MR_YUSUFF_GBOYEGA_ABDULAFEEZ
@HON_MANCOT
+2348183552178
Back to Blog List

You're Not Totally In Control.

The Environment, Our Health