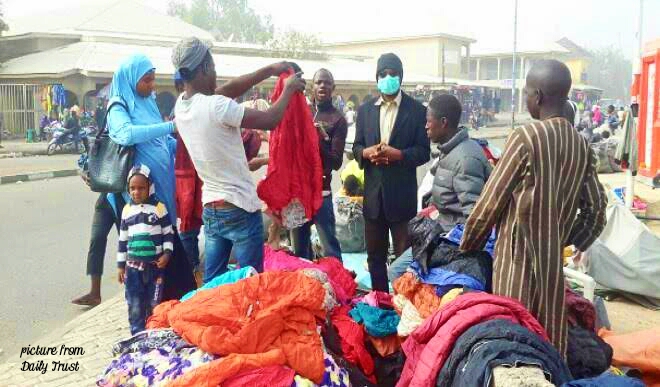 The harmattan season is the period when the rooms are cold, people dive under the cover, move about in sweatshirts, head warmers, boots and other cold protective wears. It is a time of stress for shopkeepers having their stores especially in open spaces such as those along the roadsides. People wake up to wetting the grounds, wiping off dusts on every items in homes, vehicles and offices.

Harmattan is the cool dry wind that blows from the northeast or east in the Sahara picking large amount of fine dusts and sand particles as it passes over the Sahara and are then transported hundreds of kilometers towards the Atlantic Ocean.

The name is related to the word ‘harmatta’ in Twi language, a dialect of the Akan language spoken in southern and central Ghana as well as southeastern Cote D’Ivoire.

Harmattan blows during the dry season causing the air temperature to fall, in most places, to as low as 9°C, but can be hot in certain places, soaring to as high as 30°C in the afternoon depending on local circumstances. It is strongest in late fall and winter (November to mid-March).

Harmattan is characterized with wide fluctuations in air temperatures of the day and night. It desiccates the air bringing the relative humidity, a measure of how much water is in the air, drop below 5% (i.e. the percentage of vapour in the air compared to what the air can hold). These affect the environment and human health mainly negatively in various ways.

Consequently, the condition of dryness increases the risk of fire outbreaks, there usually are strict warnings against indiscriminate burning especially wastes from farms. Harmattan is a catalyst that makes fire to burn faster and could go out of control especially at night. Field crops are as well damaged due to loss of soil moisture. Air travels are at risk so also is the increase in road accidents due to reduced visibility.

You can agree with me that you feel worse when you engage in strenuous activities such as running or playing football in the harmattan season compared to other seasons. With a persistent low temperature and dryness, people develop dry skins, cracked lips, dehydration, frequent thirst. The eyes are exposed to dusts causing itching and eye redness.

More so, frostbite, a condition in which skin and the tissue just below the skin freeze occurs during harmattan. It mostly affects small, exposed body parts such as fingers and toes, however, it’s a rare case in Nigeria having a record of 500 cases per year.

Lastly, the respiratory organs are also at risk as they communicate directly with the atmosphere. There are usual occurrences of catarrh, nose bleeding and the worst case asthma attacks during harmattan periods.

So how can one survive the harmattan season? The following listed practices have been proven to help;

Nonetheless, harmattan is not entirely a negative season, the faces get smoother and acne free, and the weather is not favourable for mosquitoes to breed. Therefore, it is also beneficial to human health.

Stay warm, endure and enjoy the season while it lasts.

OVER 100 DESIGNS CHURNED OUT FOR ISERH UNDERGRADUATE STUDIES CLASS 5